Our School » Ardena and Vicinity 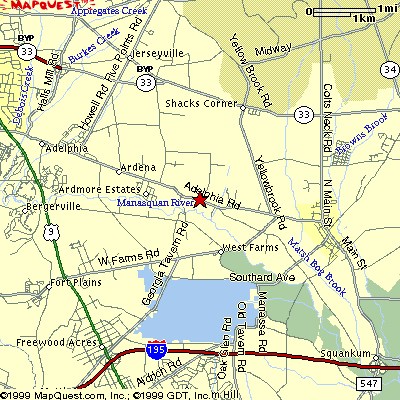 Map
Ardena School is located in the northern portion of Howell Township, Monmouth County, NJ. Howell Township has the largest area of any township in Monmouth County. It has an area of 62.10 square miles with a population of over 40,000 residents. Its people reside in single family detached homes to farms and condominium communities. A large variety of horse farms, agricultural, commercial and industrial zones make up the township.
The diverse community encompasses a variety of ethnic and religious groups including the largest Kalmuk and Buddist community in the United States. Most major beliefs including Baptist, Catholic, Jewish, Greek Orthodox, Presbyterian, and Methodist congregations dot the community. A large Cossack community was established in the 1930's when during the Russian Revolution many emigrated to America.
Local Activities
With Howell's proximity to the seashore, Great Adventure, New York City, Philadelphia residents can find activites ranging from amusement rides to nature trails, horseracing to horse breeding, local plays to Broadway, swimming in the surf to boating in the reservoir.
Municipal Complex
The municipal complex was originally a Preventorium, opened in 1912, to provide a healthy place for children who had been in contact with tuberculosis. It remained used for about 50 years. It later was used as a Child Care Center. It was renovated and reopened as part of the township municipal complex.
Manasquan Reservoir
The reservoir supplies 30 million gallons of water a day to Howell Township and surrounding towns. Water is pumped over 5 miles to reduce water drain from underground aquifers. Established in 1987 its 4 billion gallon capacity supplies areas for fishing, ice skating, hiking, horseback riding, bicycling, and boating activities as part of the Joseph C. Irvin Recreational Area.